The second edition of Gauge Theories of the Strong, Weak, and Electromagnetic Interactions was published by Princeton University Press in September 2013. I invite you to review the Table of Contents and read Chapter 1. All the Illustrations are available in digital format for classroom use. I maintain a current list of Amplifications & Corrections.

Reviewers have offered some generous Endorsements, and the Bookends section of Physics Today Online featured my thoughts about the past, present, and future of particle physics.

From the Preface:  The book is intended to serve as a text for a special topics course for advanced graduate students and as a monograph for reference and self-study. It may also be used, selectively, to supplement a course on relativistic quantum mechanics.

I have developed the subject as a logical whole, while bearing in mind that it should be possible to open the book at random and make sense of what is written. There is both a coherence and a progression, in that issues raised in early chapters are recalled, amplified, refined, and—in some cases—resolved later in the text. There is an accompanying evolution of the physical concepts and mathematical techniques.

I have stressed the essential interplay between theory and experiment, with respect to qualitative phenomena, symmetries, and specific numbers. Not least because of the mutual stimulation of observation and abstraction, I have included in the text detailed calculations of experimental observables and have posed a number of similarly explicit problems. Among the fondest memories of my physics infancy are those of a summer vacation during which I came upon Heitler’s classic treatise on the quantum theory of radiation and Feynman’s two slender volumes on quantum electrodynamics and the theory of fundamental processes and began to understand how to compute and how to learn from experiment. Not every beginning reader will experience a similar epiphany, but I have sought to provide the opportunity. There is another reason for undertaking explicit calculations, which is to be struck by some of the consequences of gauge invariance. This can be done only by witnessing at first hand the miraculous cooperation among Feynman diagrams that leads, among other things, to an acceptable high-energy behavior of the weak interactions.

At the end of each chapter, I have provided an extensive reading list. These annotated bibliographies offer amplification of points of conceptual or technical interest, introduce further applications, or guide the reader to alternative presentations of the text material. It should not be necessary to consult the documents cited in order to master the contents of the chapter. Rather, they are intended as a selective guide to optional further study.

Although a detailed description of the topics covered in this book can be found in the Table of Contents, it is appropriate to present a brief overview here. The opening chapter contains a capsule review of elementary-particle phenomenology and a preview of issues to be elaborated later, including the importance of the 1-TeV scale. Chapters 2–5 develop the basic theoretical concepts, proceeding from the elementary implications of symmetry principles through electrodynamics, non-Abelian gauge theories, and the notion of spontaneously broken symmetries. The emphasis in this part of the book is on conceptual matters, but applications are not entirely neglected. The last four chapters are devoted to the gauge theories that describe the strong, weak, and electromagnetic interactions. Two chapters are concerned with the electroweak theory—its successes, the search for the agent that hides the electroweak symmetry, and indications that the electroweak theory cannot be the last word. Quantum chromodynamics, the theory of the strong interactions, is the subject of chapter 8. The final chapter deals with the program of unifying the fundamental interactions, the principal ideas and consequences of which are studied in the context of the minimal SU(5) model. A brief epilogue highlights some open questions for experiment and theory. Matters of convention and other technical issues are relegated to three appendices.

The first edition of Gauge Theories was published in 1983 by Benjamin-Cummings in the distinguished Frontiers in Physics series edited by David Pines, and reissued in 1997 by Addison-Wesley as an Advanced Book Classic. 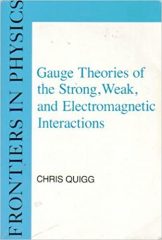